It was just after dusk on a Saturday night. The rain was coming down and the wind blowing through the trees. Surely any self respecting critter would have been hunkered down deep in their tree hollows or burrows….

The same couldn’t be said for the Project Platypus team and our visiting colleagues from the Central Biolinks Alliance. Equipped with wet weather gear and ‘night vision goggles’ (or more accurately, thermal imaging monoculars), we were setting out on a mission to find Squirrel Gliders…!

The cold and rain didn’t dampen our excitement!

One of the biggest threats to Australian biodiversity is habitat loss and fragmentation. This results from land clearing for development, agriculture, and forestry. When habitat is divided into smaller, disconnected patches, it becomes more difficult for animals to move across the landscape to find food, shelter and mates. As a result, the populations dwindle.

This is sadly the story for one of Australia’s most adorable animals (and I say this as an insect and reptile fan who is always a bit bitter that mammals get all the love)…the Squirrel Glider.

Squirrel Gliders are an endangered species in Victoria. Their populations have become extremely fragmented and numbers have dwindled. 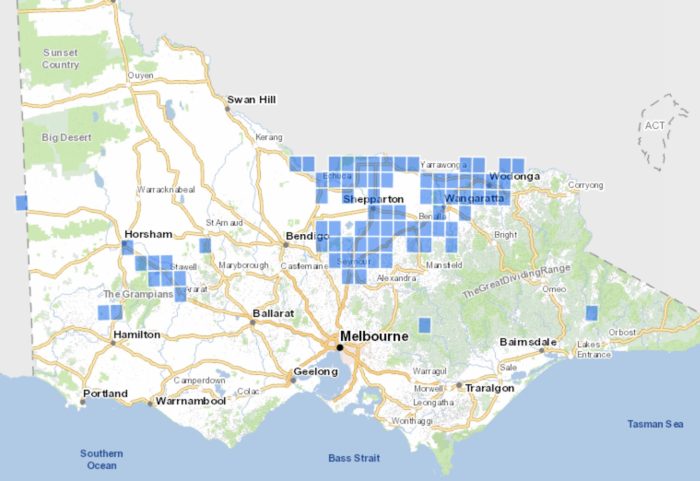 On the map above,  you can clearly see the fragmentation of the Squirrel Glider populations. But this map might already be quite out of date. While there are populations visible in the Northern Grampians region on the map, these are all old records. No Squirrel Gliders have been reported around Dadswell Bridge and Glenorchy since 1991. We worried that without up-to-date data, the gliders could still be declining right under our nose!

So we wanted to know, have we indeed lost these isolated populations?

Or are they still hanging on? Perhaps even finding new homes in sites that have been revegetated by our local Landcarers?

We aren’t the only ones who want to find out the answer to these questions. Our neighbours at the Central Biolinks Alliance recently held a symposium where the same questions arose. Central Biolinks Alliance is involved in a national glider conservation program, called Glideways. This program aims to team up local conservation groups all across eastern Victoria, to connect glider habitat in the Grampians all the way to Far North Queensland in one long “glideway.”

The area between the Grampians National Park and Pyraneese State Forest would be an important section of the path. If Squirrel Gliders were indeed still living within that path, we want to know exactly where. Then we can plan the next habitat stepping stones needed to connect their isolated populations and help them once again move across the landscape and flourish.

So the Central Biolinks Alliance and Project Platypus decided to team up on a survey! Expert glider spotters from the Central Biolinks Alliance, Chris Pocknee and Bert Lobert, picked out several sites they thought would have the highest chance of hosting gliders, based on previous records and their knowledge of what sort of habitat the gliders prefer. Then they came down for a weekend of squirrel searching in late November. We conducted two nights of surveys in small teams – I joined on night #2.

Here is what we found…

The night of the squirrel search

We started our search just after dusk. We walked quietly through the woodlands, using a thermal imaging monocular to look for ‘warm bodies’ sitting in cold trees. We also each had a torch, but as you can see in the photos below – a simple torch was no match for the spotting power of the thermal monoculars! So we left our torches turned off and walked in the darkness, until a heat signature was spotted. 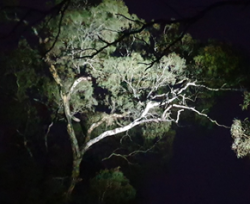 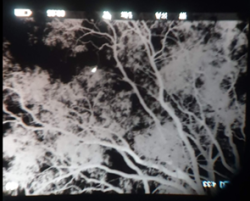 In the photos above, you can really see the value of a thermal night scope in quickly spotting nocturnal arboreal birds and mammals. On the left is what our eyes see, as we shine a torch into the branches at night. But on the right is our view through the thermal monocular. A nocturnal mammal glows clearly towards the upper left of the photo!

After finding a heat signature, we would turn our torches back on, to confirm what sort of critter we had found. Chris’ excellent camera helped greatly in this task. 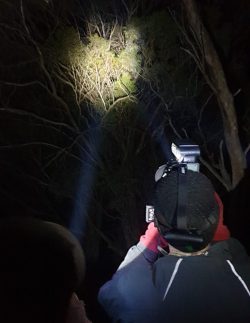 Checking a heat signature with our torches and camera

Our first two sites yielded several Sugar Gliders. This was an exciting enough find for those in our group, like myself, who had never seen them in the wild! We also saw several Ringtail and Brushy Tail Possums, sleeping birds, and a tawny frogmouth.  But no Squirrel Glider yet…!

As the chill set in and our warm beds sounded more and more inviting, we cracked into the “emergency chocolate” and decided to try for one more site just off the Western Freeway. After a few false starts, and an encounter with a fox, a promising ‘glider-ish’ shape was spotted through the thermal monocular. We snuck up close, turned on the lights, and there it was…a magnificent Squirrel Glider!

I have to admit, I was suspicious that a Squirrel Glider could be any more adorable than the Sugar Gliders we had already seen. But I must admit, with its luxuriously long and fluffy tail, the Squirrel glider took the prize! 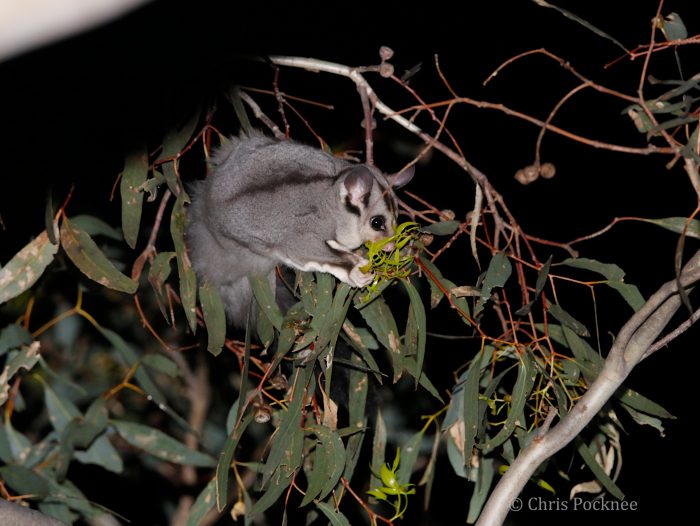 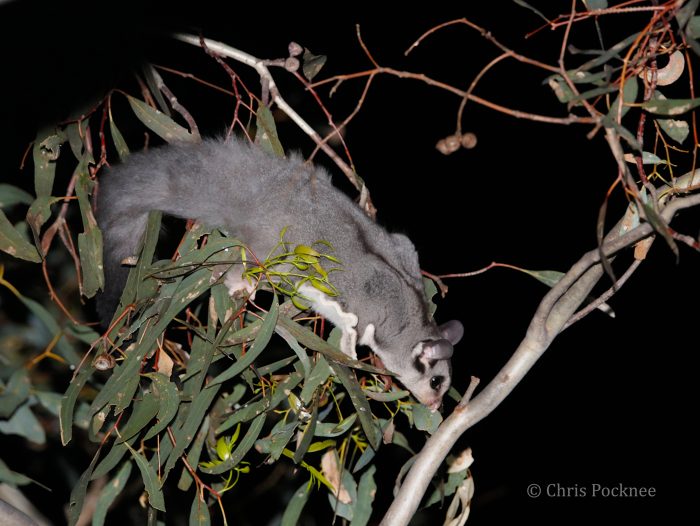 Thank you Chris for your fabulous photos of the night’s exciting find!

This glider was a bit of a performer as well. We must have stood watching it forage around the branches for 20 minutes or more! We even saw it make a leap, miss its intended branch, and tumble ungracefully to a lower branch.

In the end, two Squirrel Gliders were spotted, at two different sites, across the two nights of surveys. We had covered 7 km of transects, over just about 10 hrs of nocturnal observations. We detected nine mammal species, two nocturnal bird species and five frog species.  The success of these two relatively short nights surveys made us feel incredibly optimistic about the potential Squirrel Glider population still present in our region!

We can’t wait to get out for more surveys in the New Year! We are particularly keen to visit more of our Landcares’ historic plant out sites to see what rare species, such as Powerful Owls and Squirrel Gliders, are now calling these sites home!

On our night out with Chris and Bert, we definitely learned that thermal monoculars are an essential tool for nocturnal mammal surveys. And we are very excited to share that the Stawell Gold Mine has generously given us the funding to buy our very own thermal monocular!  Project Platypus staff are excitedly picking one out as we speak. Thank you so much to the Stawell Gold Mine Community Grants Program!

In the New Year, with our shiny new thermal monocular, we will work with our Landcare Groups to conduct more surveys for nocturnal mammals and birds across our landscape. With a better picture of which species are living in our area, and in which patches of habitat, we can pick the best habitat stepping stones to create next!