The inspiration for this month’s native species profile comes from the buzzing sound I have been listening to non stop over the last three days as I sit in my work shed. It is the sound of an extremely stubborn wasp who is determined to stuff every little hole around my desk full of spiders!

This might sound like an extremely bizarre thing for a wasp to do, but for a “mud-nesting spider wasp,” this is standard behaviour. 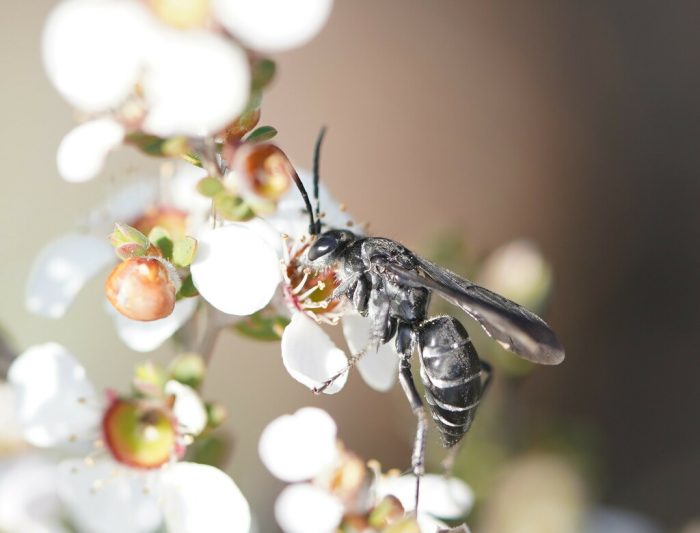 “Mud-nesting spider wasps” are a group of wasps that belong to the family Pompilidae. These wasps are named for their favourite food (spiders), and their favourite nest building material (mud).

What you might not expect is that these wasps are also very caring single mums.

After mating, the female begins the search for a good spot to make a nest. Some species will dig a burrow in the sand, while others look for a nice little pre-formed hole in a tree (or in a desk frame, in the case of my office visitor!) She picks a spot that has a nearby source of mud, which she can collect in her jaws, carry to the nest site, and then carefully shape into a small capsule shaped nest using her mouthparts and front legs.

However, she doesn’t just ensure her offspring have a safe nest, she also packs them a lunch!

Check out this tweet from my friend, Dr. Lizzy Lowe, who found an unlucky huntsman spider that was destined to be a snack for a baby spider wasp: 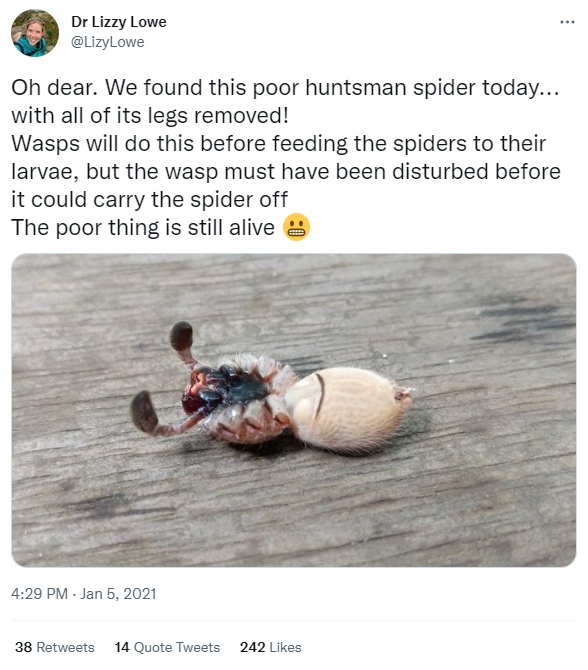 The spider wasp carries the paralysed spiders back to the nest, and deposits them inside, one by one. She packs the nest full of fresh spider snacks. Each capsule might have a dozen spiders inside! Then she lays her egg, one per nest capsule, and seals it up with mud. 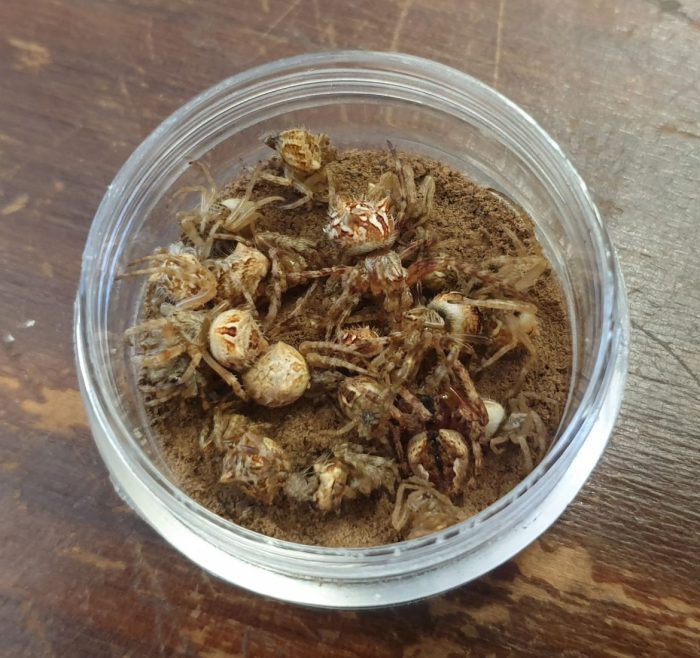 Here are all the spiders I pulled out of two separate nest capsules inside my desk! 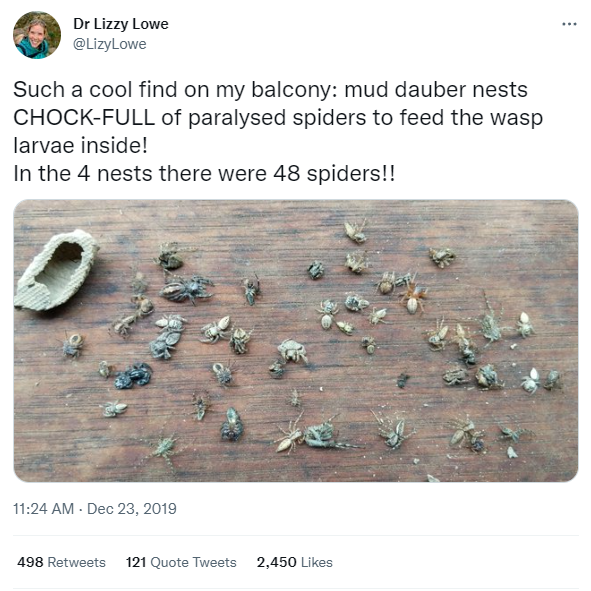 Another tweet from Lizzy, showing all the spiders she found inside similar mud capsules. This nest was made by a cousin of the mud nesting spider wasps. It was build by a mud-dauber wasp (family Sphecidae), which are part of a different taxonomic family, but share a similar behaviour.

Inside the nest, the wasp egg eventually hatches.  The baby wasp (still in its larval form) feeds on the paralysed spiders.  After it has eaten enough, it will pupate and then emerge as an adult wasp. It simply chews its way out of the mud nest and flys away.

There are many different species of spider wasps in Australia, and they can be found in a variety of habitats, including your backyard gardens. Some have bright orange wings, legs, or antennae patterns, while others are blue, black or grey. 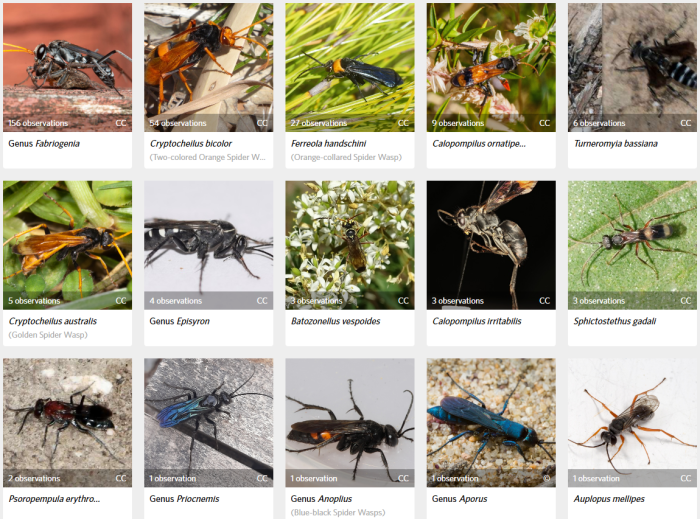 Some of the species of spider wasp (family Pompilidae) found around our region of Victoria and reported on iNaturalist.org

Pompilid spider wasps are not aggressive and will only sting if they are handled or threatened. I received nothing but a stern buzzing complaint when my office visitor discovered I had blocked off her nest sites.

These wasps are important predators, and if you find yourself a bit freaked out by things with eight legs, you can thank the spider wasp for keeping their numbers in check! The wasps also play a role in pollination, as the adults actually prefer to sip on nectar from flowers while they go searching for spiders for their less vegetarian babies.

That being said, I was not crazy about the idea of sitting at a desk stuffed full of spiders. So I removed the nests and covered up the holes that might tempt the spider wasp to try again. I even gave her a bundle of irrigation tube segments she could use instead. However, she was quite unimpressed with my peace offering. Instead, she is now buzzing away behind the stove, making new mud nests just out of reach, where I can’t steal them!