The perks and perils of roads

Spring is an amazing time in our region. The wildflower displays are stunning, the birds are singing, and we get the return of cool sunny days perfect for a drink on a patio with friends. But as we sadly know, springtime is also roadkill season. It is hard not to notice the many squished magpies, shinglebacks and turtles on our roads right now.

Why exactly do we see such high rates of roadkill this time of the year?

The simple answer is that we are not the only ones feeling the irresistable draw of the warm sun on a cool day – early spring is the start of ‘reptile basking’ season, as our scaley neighbours leave their winter hides to find places to warm up. And what about all the magpies out and about right now?  It is of course ‘baby season’ for many animals, magpies included, and parents are still teaching their young how to safely find food.

The more complicated answer is that roads are notorious for attracting wildlife, in a phenomenon scientists call an “ecological trap.” This phenomenon contributes to wildlife deaths on our roads all year long, but with a particular rise in the spring time. Read on to learn more. 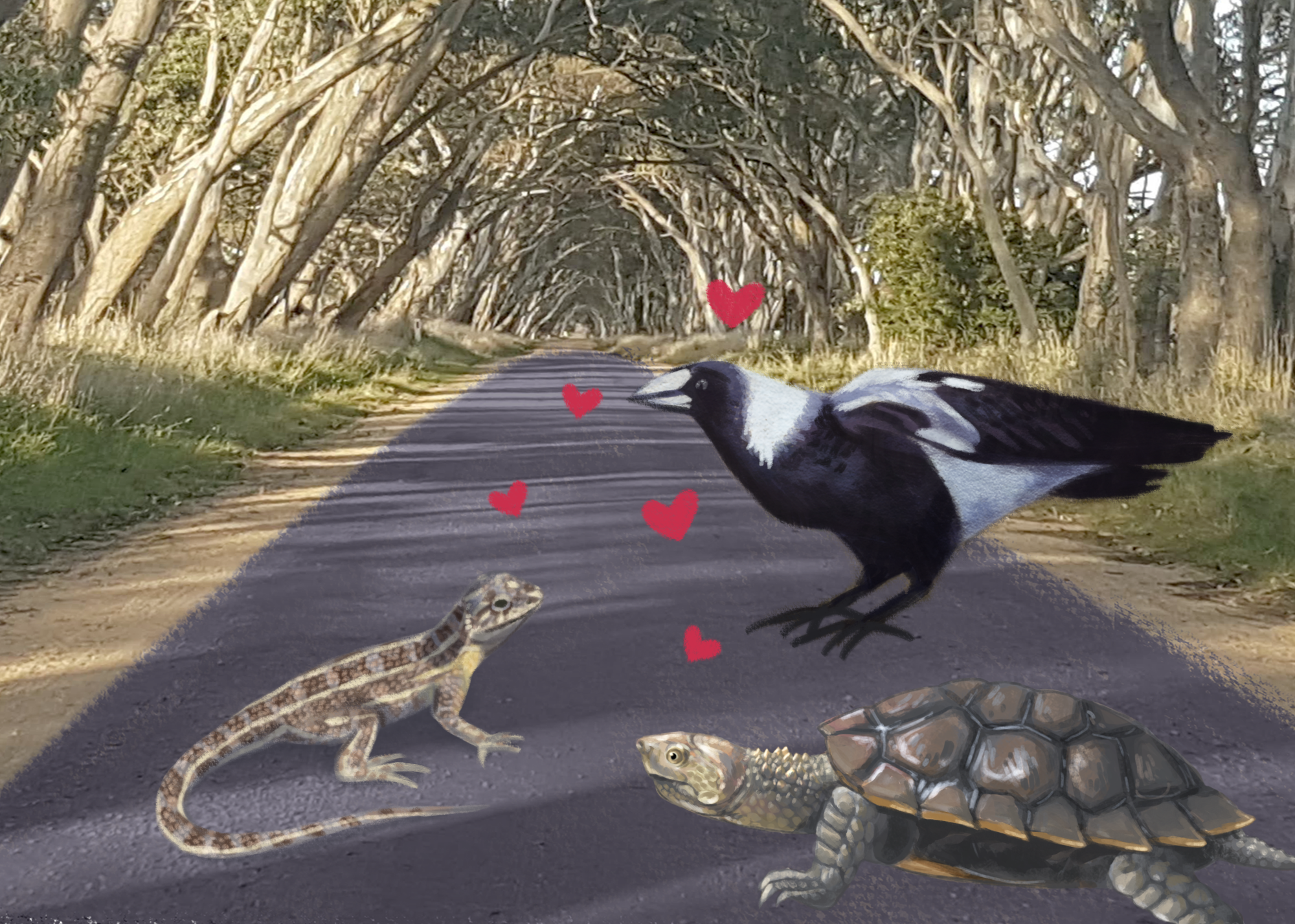 Roads can be very attractive to our local birds and reptiles, but it is a trap!

What is an “ecological trap”?

Animals are very good at looking for environmental cues to find places they can live, thrive and reproduce successfully. These cues are formed from tens of thousands of years of evolution – they are deeply hardwired into an animal’s instincts. And all that time, the association was strong between the presence of these cues and an animal’s survival.

However, in the last 200 years (which is an absolutely tiny fraction in the evolutionary history of many species), humans have added some strange new features to the environment. Some of these features have meant that long-established cues of good quality habitat have suddenly become very unreliable.

A classic example is the presence of artificial light at night, which is an extremely new phenomenon to navigate for many species (see an example involving sea turtles included at the end of this article).

The perks of roads

Roads are yet another new feature in our environment that causes previously reliable cues to become “ecological traps”.

Road sides tend to be very productive sites, and are thus often very attractive to wildlife as they contain many cues of good quality foraging and breeding grounds. As Dr. Alisa Coffin from the University of Florida discussed in her comprehensive review of the impact of roads on wildlife, roads can:

In Australia, roads have an additional draw for wildlife – due to the dramatic clearing that grassland and woodland habitats in south eastern Australia has experiences, roadsides often act as last remnant sites of native habitat.

For our “cold-blooded” or more accurately “ectothermic” neighbours, as Denim Jochimsen from the Idaho Fish and Game Department discusses in his comprehensive review of the effects of roads on reptiles and amphibians, there is an additional attraction for roads.  At this time of year, many reptiles are coming out of winter hibernations, as the days start creeping up in temperature. Many are starting to migrate around in search of new foraging or breeding grounds.

But in the spring season, when mornings can still be quite cool, they can’t just pop out of their burrow or rock hide and get straight into the days activities. They have some minimum body temperature they must first achieve before they can get out and about foraging effectively. So they need to start their day ‘warming up’.

A rock amongst the grass is usually the sort of spot they like to choose, as the surface of the rock captures more of the sun’s energy and warms up much quicker than the damp soil, while also creating a break in the grass canopy so the reptile can sit directly under the sun’s rays. So if a lizard gets excited about a good basking rock, you can imagine how attractive the expansive warm, dark black roads look to a chilly lizard.

Right now, we are getting many days where the air is still cool but we are getting more sunny days which can warm up the ground. They cannot resist the draw of a warm belly on the road pavement.

The perils of roads

Of course, we know that roads are actually quite a bad place for wildlife to hang out due to the great risk of mortality caused by car collisions. The problem is, many species attracted to the productive features of roadside habitats have not had even close to enough time to evolve an instinctual association between the roads and high ‘car predation’.

The result is roadkill. Researchers from the University of Western Sydney calculated that 9 million kangaroos and wallabies may be killed on Australian roads every year. According to research from peri-urban roads near Sydney, as well as rural roads in the Australian interior, about 10% of local populations of swamp wallabies and kangaroos respectively were being killed on roads yearly (reviewed in Burgan and Brainwood 2008).

The numbers are likely much worse for smaller species like magpies and stumpy tail lizards, but their deaths are simply not recorded to the degree of larger mammals. One study in the United States observed a 100% mortality rate for snakes attempting to cross a highway in Florida. Another saw particularly high levels of autumn roadkill among snake species which regularly migrate to find winter burrows. Autumn is the time when sportsman activity (and thus car traffic) was highest in the wilderness area in question (reviewed in Jochimsem 2004).

This, thankfully not squished, sand goanna lived to bask another day, but it was playing it risky laying out in the middle of a road near Stawell

What about animals that can learn?

Animals may not have had the time to evolve an strong instinctive aversion to roads yet, but some species are quite good learners and may be able to learn how to navigate roads more safely within their own lifetime.

However, even for clever species, like our magpie ravens, this learning takes time, putting young birds at highest risk of car related deaths. This has been shown by a great deal of research conducted in Europe, with some studies showing that up to 90% of bird deaths between late spring and early autumn were of juvenile birds, while the rates of juvenile to adult deaths then tended to equalize into the winter (reviewed in Erritzoe et al. 2003).

Around this time every year, it’s hard not to notice all the baby magpie ravens hanging out along our roadsides. They are learning from their parents that road sides are a great place to find food, in the form of basking lizards, insects and roadkill, but they are also still learning how to avoid speeding cars. As we can sadly see clearly each day, many of the babies don’t learn the lesson in time. 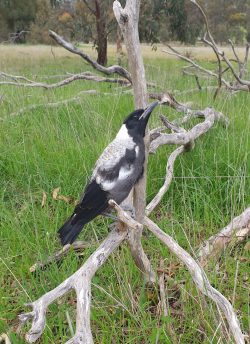 This little magpie juvenile in the backyard wasn’t getting my message that the ground is probably not a great place to spend the night, but with some persuasion eventually fluttered up into the tree

Take it easy on the roads!

The roadkill rates tend to drop again as the summer progresses, as the babies learn the rules of the road, and also as the ground temperatures warm and roads are no longer the by far best place for a chilly reptile to warm up.

But right now, our baby birds and chilly reptiles seeking warm bellies need a bit of extra help, so please take it just a bit slower on the roads, to give them the best chance of making it through the spring!

Alisa W. Coffin. (2007). “From roadkill to road ecology: a review of the ecological effects of roads.” Published in the peer reviewed scientific journal: Journal of transport Geography: Volume 15(5).

Blair E. Witherington, (1986). “Human and natural causes of marine turtle clutch and hatchling mortality and their relationship to hatchling production on an important Florida nesting beach.” Dissertation available through the University of Florida.

Denim Jochimsen, et al. (2004). “A literature review of the effects of roads on amphibians and reptiles and the measures used to minimize those effects. Published by Idaho Fish and Game Department, USDA Forest Service.