In the Weeds: Serrated Tussock

Serrated Tussock, Nassella trichotoma, is a highly invasive plant that have been identified as a higher priority by the Victorian government. Serrated tussock is classified as a ‘regionally prohibited weed’ outside of the core area of the Corangamite, West Gippsland, Port Phillip and Western Port catchments. So the ‘Regionally Prohibited’ classification would be in the Mallee, Wimmera, North Central, Glenelg Hopkins, Goulburn Broken, North East, and East Gippsland catchments. Regionally prohibited means it is not yet widely distributed but is capable of spreading further. A regionally prohibited is one for which it is reasonable to expect that it can be eradicated from a region. Thus, under Victorian legislation, land managers must take all reasonable steps to eradicate regionally prohibited weeds on their land.

Where did it come from?

Serrated tussock is native to Argentina, and was accidentally introduced to Australia in the early 1900s, most likely through contaminated fodder shipped from New Zealand, and was first detected in New South Wales in 1938. Now it covers over 1 million hectares throughout New South Wales, Victoria, and Tasmania, in diverse habitat types including native pastures and grasslands, coastal areas, open woodlands, and roadsides.

Why don’t we want it in our region? 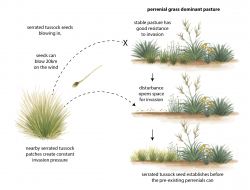 Why it is so good at spreading?

This species evolved in South America with several traits that make it an excellent invader and establisher (Source: Humphries and Florentine 2021). These traits include:

For example, there are not many effective chemical options, and the most common chemical control for the tussock, flupropanate, will also reduce native grasses, such as wallaby, weeping and kangaroo grass. Applications of this chemical impacts many perennials, not just serrated tussock, allowing broadleaf weeds and annual grasses to invade, and finally allowing tussock to rapidly recolonise in the absence of the native perennials once the chemical has leached away. (Source: Badgery et al. 2008, Grech et al. 2013, Grech and Lauren 2010 whose report you can read here) 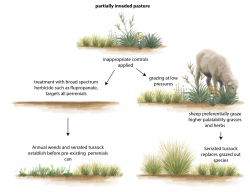 Similarly, grazing inappropriately can also exacerbate the problem. If given the choice, stock will eat anything they can before moving on to tussock. Allowing stock to selectively graze out only the palatable species serves to remove competition for the tussock and allows it to further proliferate. There has been a great deal of Australian research dedicated to creating management plans that avoid accidentally releasing tussock from competition, and instead promote high competition by native perennials. (Some sources: Badgery et al. 2002, 2003 and 2008)

Is it likely to keep spreading without any intervention?

Yes! It is possible to predict where a species will leave assuming it could spread unimpeded by looking at all the climatic conditions it is currently found to determine the “climate space” where it can survive, and then looking for similar climate spaces across Australia. By doing this, researchers have found that Serrated Tussock could happily live over 32 million hectares in South East Australia (Source: Reviewed by Humphries and Florentine 2021 and Badgery et al. 2003). This means it has almost certainly not reached the edges of its possible expansion.

Talia Humphries and Singarayer K. Florentine (2021). A Comparative Review of Six Invasive Nassella Species in Australia with Implications for Their Management. Published in the peer reviewed Journal: Plants. (Volume 10).

What is being done to control Serrated Tussock?

Right now, it is mostly contained within the Melbourne region thanks to heavy focus from the working party, but they deal with continual incursions across Victoria. Our region is certainly not exempt. It has been found in several areas within our region, including:

One of our major players in the control of serrated tussock is the Serrated Tussock working group. The excerpt below, provided by the working group, gives some information about their background:

“In 1995 the community was deeply concerned with the spread of serrated tussock, a devastating weed that had invaded 140,000 ha of land in Victoria. In response to that community concern, a strategy for the control of serrated tussock in Victoria was produced, which called for the development of the Victorian Serrated Tussock Society, as it was known then. Today, that organisation is the community-managed and driven Victorian Serrated Tussock Working Party (VSTWP).

Since that time, the Working Party has strived in partnership with all levels of government and their agencies, industry, research institutions, Landcare and the wider community to achieve the recommendations of the Victorian Serrated Tussock Strategy. These include undertaking research into pastures and herbicide technology, production of appropriate extension materials, provision of incentives to land managers and community groups and a comprehensive mapping, extension, monitoring, and compliance campaign.

The VSTWP is an incorporated non profit organisation comprised of community members in collaboration with a range of stakeholders, including members of the State Government, Catchment Management Authorities, Local Government, Landcare, VicRoads and Vline/VicTrack. Program staff and extension officers work closely with Landcare groups, land holders, local government, and other agencies to promote a holistic approach to land management and serrated tussock control.

The VSTWP is part of a wider effort to manage pest animals and plants in Victoria. Similar initiatives include the Victorian Blackberry Taskforce and the Gorse Task Force. The key financial supporter of the VGT is Agriculture Victoria.”

What can you do to prevent its spread?

The VSTWP has created many resources to help you identify Serrated Tussock, track its spread, and if you are in an affected region, manage it appropriately to prevent further spread. You can find all these resources on their webpage here. Particularly useful resources include an identification guide and a best practices management guide.

If you see Serrated Tussock, please report it! As you can see on the map below, it is not yet widely established in our area. Let’s do our best to keep it that way. Report any suspected sightings in our area to Agriculture Victoria at 1800 084 881.